Halloween is just around the corner! Due to the current COVID situation, we may not be able to go for Trick or Treat this year. However, here are some other fun alternatives for you to check out!

Encounter the Mad Doctor as you navigate the maze of winding corridors of the hospital ward. You can also catch a horror movie, Escape Room 2, afterwards!

Old Changi Hospital is known to be one of the spookiest places in town. It’s time to solve a murder mystery of a canteen lady, who also held four Commandos captive.

This escape room may be virtual, but it will feel like a reality through 360-degree videos, augmented reality, and spatial audio surround sound.

Image from National Museum of Singapore

Ever wondered what is The Day of The Dead? It is a feast from the Mexicans’ harvest of beans, chickpeas, corn, and pumpkin. It is given to the Aztec goddess Mictecacihuatl, the Lady of the Dead.

Find out more about this festival through these main exhibitions:
-A 360-degrees pyramid of approximately 4m x 4m x 4m
-A market surrounding the pyramid

We all know SuperPark as a fun playground for people of all ages. What happens when a  fun playground turns into a spooky one with scare zones that are awaiting you?
Walk through the creepy cemetery, land of mischief and even an abandoned church in the dark whilst paying respect to the dead. All activity stations are still opened during this period!

What is Halloween without some horror films? At ArtScience museum, you can catch a screening of an original horror film, The Cabinet of Dr. Caligari in its full restored glory.

Join in for spooky virtual tour featuring some of our biggest past exhibitions as well!

Who can say no to free coffee? Because Flash Coffee has something special for you!

From now till 31 October, you can redeem free beverages from Flash Coffee at the Jurong Point outlet.

They have a range of beverages from coffee to non-coffee drinks and even protein shakes! Even if you are not a fan of coffee, you can definitely get a drink that is your cup of tea. So, what do you have to do to redeem your free drink? Simply download the M Malls app and enter the promo code “FCOFFEE” when signing up as a member to receive the e-coupon in your wallet.

Head down to Jurong Point for a refreshing drink to quench your thirst!

Here’s another good spot for your Friday night getaway! Wiped Out is a rooftop bar located in the vicinity of Bukit Timah.

The ambience is tranquil and you can even catch the beautiful sunset! Good food, good mood and good company. What more can you ask for?

Despite being a rooftop bar, it is also wallet friendly at the same time. Here are some of the good deals you wouldn’t want to miss out!

Where can we find such affordable alcohol prices at a bar? Whichever brand you may prefer, all bottles are just priced at $5 each during the Happy Hour.

Of course, what’s alcohol without some bites to go along with it? You’ll be able to get fries from just $2.50! Usually, the prices can even go up to $10 for a plate of fries.

Head down to Wiped Out and let your hair down!

Are you a fan of spicy food? TamJai SamGor Singapore is just the right place to satisfy those cravings!

There are currently weekday lunch promotions as well as student meals for you to enjoy with your friends and colleagues.

A good meal under $10 is hard to find nowadays! Simply top up $5.50 for some Tufei Chicken mid wings.

Calling out all students as you can enjoy your bowl of Mixian for just $7.90 with a drink!

Happy World Pasta Day! Pasta is such a simple dish, yet so delicate and delicious. From Aglio olio base to tomato and cream base, there’s so much to choose from depending on your preference.

If you are thinking of indulging in some pasta, Pasta Mania is having 1-for-1 on all their pasta from now till 29 October.

It is available for dine-in & takeaways across all outlets.

Are you planning your next Friday Night gathering after a hectic week of work? Here’s a good deal for you!

Pizza Express is currently having 50% off on its entire menu, which includes pizzas, desserts and even alcohol. 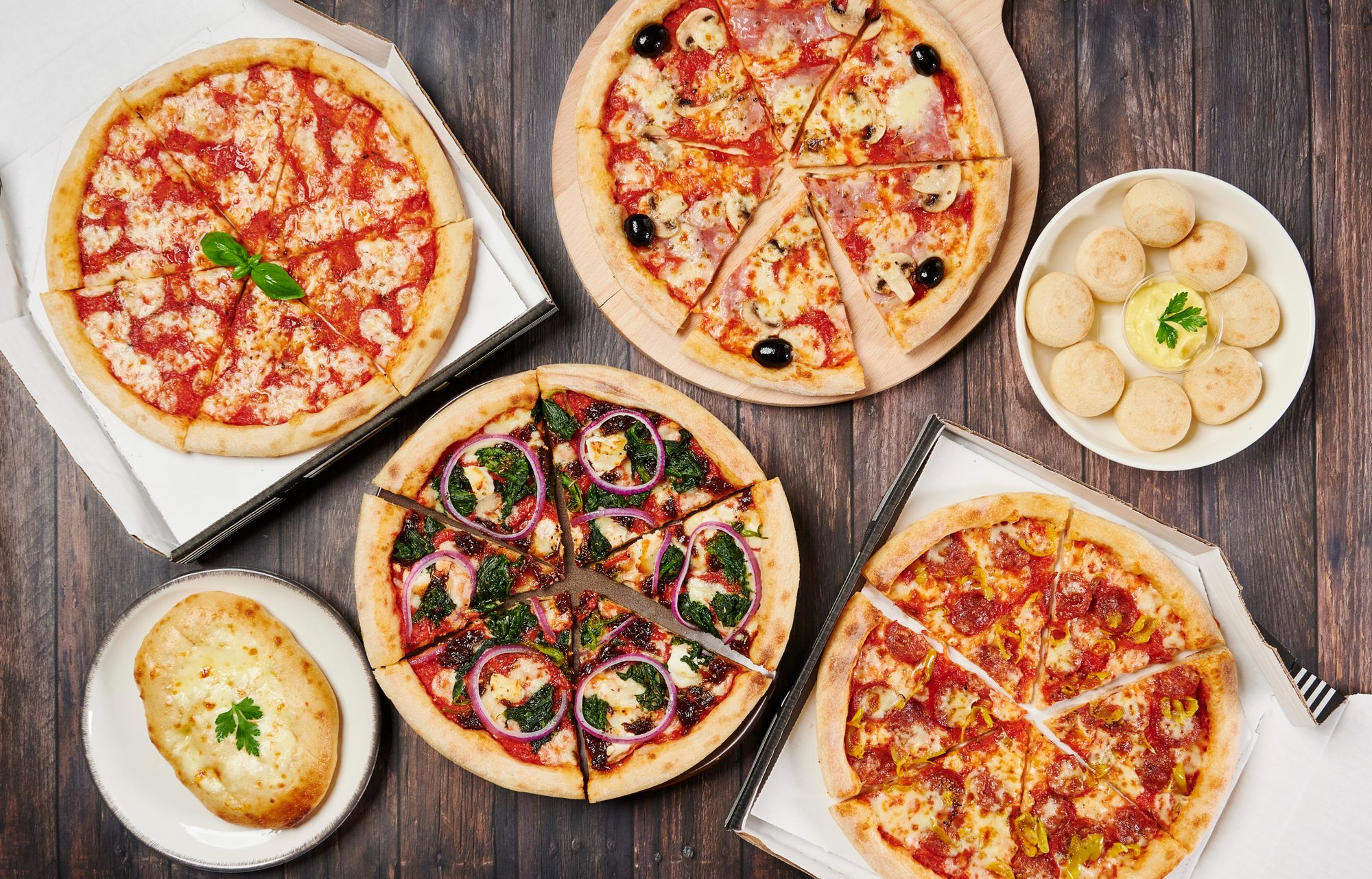 All you have to do is to pay a $5 cover charge per adult to enjoy the discount and it is only available for dine-in customers only. Here are the outlets you can enjoy this promotion at:
-Holland Village
-Duo Galleria
-Scotts Square

Head over to PizzaExpress to get this amazing deal before it ends!

Your favourite Starbucks 1-for-1 promotion is back! This time, with the Pumpkin Spice Frappuccino since Halloween is around the corner.

From now till 28 October, enjoy a 1-For-1 Venti-sized drink for the following drinks:

Simply pay with the Starbucks card to redeem the deal at any Starbucks outlet, except Jewel and Changi Airport.

It’s Belle-Ville Pancakes’ third anniversary! To celebrate this occasion, they are offering 1-for-1 pancakes and drinks at their Bugis outlet.

It is valid for all pancakes and drinks except for juice and smoothie.

Here is the full menu of their delightful selection:

This is a one-day promotion on the 25 October only.

Crystal Jade Singapore is now offering a limited-time promotion that entitles you to freeflow xiao long bao from just $32.80 per pax. It is also inclusive of a bowl of La Mian and appetiser per person.

The usual price for 6 pieces of xiao long bao is $8.80. This means that you only need to eat above 4 servings to make the most out of your experience!

Each table can choose one bowl of La Mian per person:

As well as one appetiser from the following list:

Milkshake for a hot and humid weather, anyone? McDonald’s is having a promotion for milkshakes at 2 for just $3! 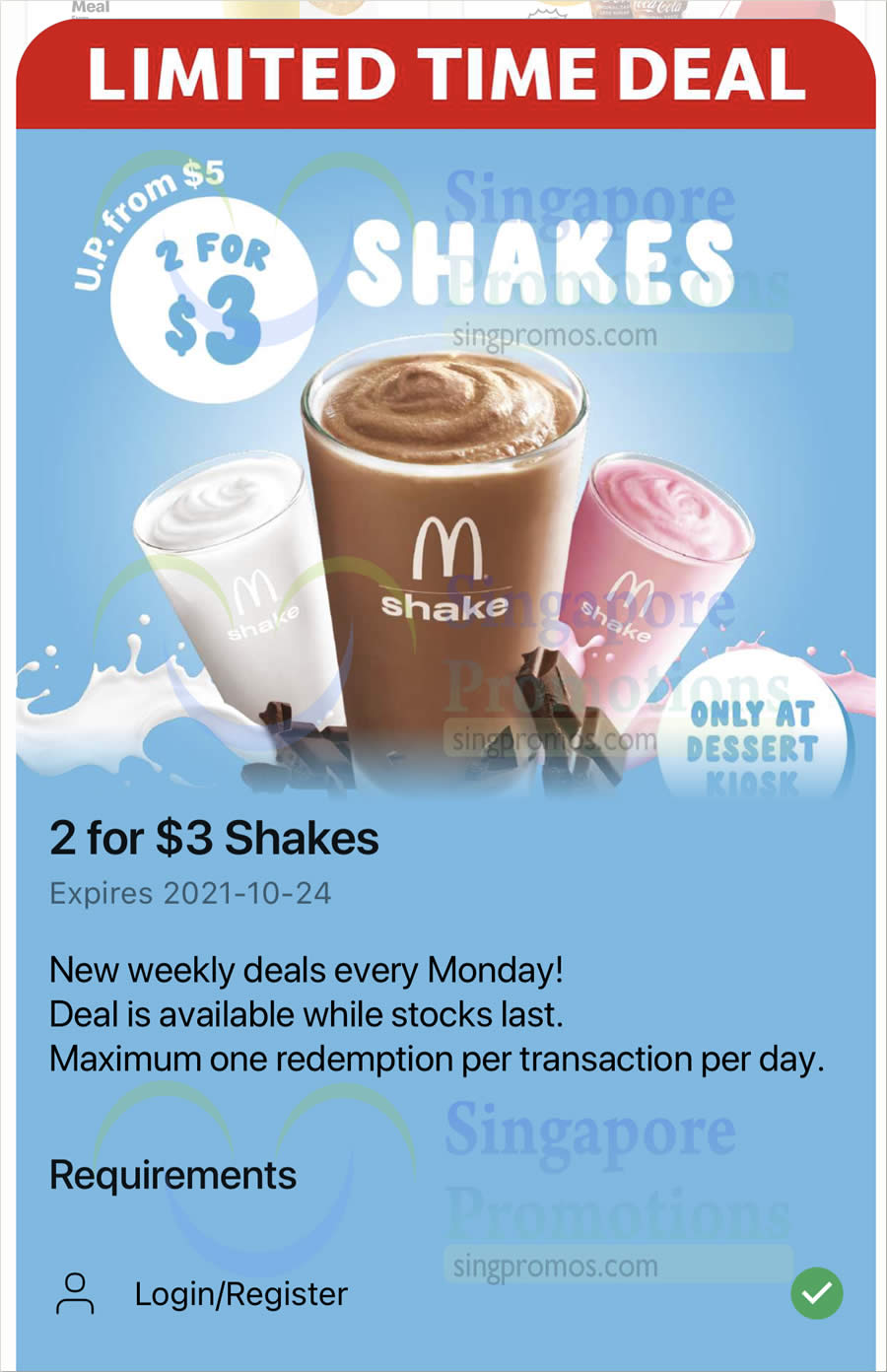 From now till 24 October, you can redeem yours via the McDonald’s App at most outlets with the dessert kiosk.

The following outlets are those without the promotion:
NTU, Polytechnics, CCK 62, Aperia Mall & Parklane